Headquartered in Ben Lomond, California, the Hill Guitar Co. operates under the guidance of luthier Kenny Hill, who has been building classical guitars since 1972. The company’s high-end classical guitars are highly regarded by serious classical players, but Hill also consults with Córdoba Guitars and has developed his own line of more affordable instruments that are built in China and sold under the New World Guitars name.
Our review guitar is a Fingerstyle-C model from the New World Players series. It has a 17⁄8-inch nut width and cutaway but has the overall look and rich, warm tone of a traditional classical guitar and is built with conventional classical construction techniques like fan bracing and a Spanish-foot neck joint. The high gloss finish, along with the dark cedar top, rich Indian rosewood back and sides, and understated look of the purfling and three-ringed rosette pattern creates an air of elegance.
Our Fingerstyle-C came equipped with an optional L.R. Baggs Anthem SL Classical electronics package, which includes an undersaddle pickup, microphone, and onboard preamp with a crossover circuit (click here for our review of the Anthem system). In contrast to other guitars in this article, the Anthem does not have controls in the side of the guitar (its volume control installs inside the soundhole).
Both acoustically and amplified, the Hill Fingerstyle-C delivers the full-bodied tone one expects from a classical guitar, with a warm resonant midrange. The guitar is quite responsive and produces plenty of volume when played hard. I appreciated the combination of the very playable neck and warm traditional tone. I was happy with the sound of traditional classical pieces as well as jazz and Latin tunes, and the guitar’s plugged-in sound was warm, full, and surprisingly feedback resistant. Fiore commented on the Fingerstyle- C’s dark tone and spent a lot of time exploring single-note melodies in the bass, as well as the wide range of tones created by varying his pickinghand position.
NOTEWORTHY FEATURES
Anthem SL Classical pickup.
Traditional classical tone.
SPECS: Solid cedar top. Solid Indian rosewood back and sides. 12-fret mahogany neck with Spanish-foot neck joint. Venetian cutaway. Ebony fingerboard. Rosewood bridge. Bone nut and saddle. 650-mm (25.59-inch) scale. 17⁄8-inch nut width. 21⁄4-inch string spacing at the saddle. L.R. Baggs Anthem SL Classical electronics. D’Addario Pro Arte strings. Made in China. Left-handed version available without a cutaway.
PRICE: $1,995 ($1,795 without electronics).
MAKER: Hill Guitar Co.: (800) 262-8858; neworldguitar.com.
Video Review
Posted by New World Guitar Company at 10:24 AM No comments:

Free Shipping on any New World Guitar this weekend only! 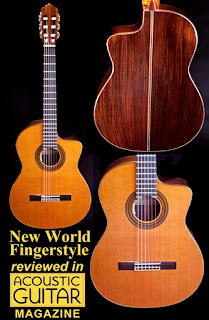 Between now and Monday 10/29 we are offering Free Shipping on  any New World Guitar from our catalog.

Posted by New World Guitar Company at 1:41 PM No comments: